Many Roads, A Common Destination

The older I become, the more I look back on my life to determine if what I have accomplished has meaning for myself and for others who have crossed my path. This kind of life review is typical for those who have entered later adulthood. The Swiss psychologist, Erik Erikson, addressed this in his Psychosocial Stages of Development when he described Integrity Versus Despair:

The description of this stage seems to be clear-cut. However, reflections on the significance of our lives can lead to unnecessary value judgments about our past   It is easy to look at the decisions we made, the paths that we chose to take, and second guess ourselves. The second-guessing occurs because our decisions did not manifest as we believed that they would. Any decision that we make is based on our present circumstances and the experiences that have touched our lives at that moment. We had no control over the future outcomes of those decisions. If we buy into the illusion that we control the future, we fail to recognize our past decisions as a rich source of learning in the present. Because we judge our past so harshly, we may be unaware of how the decisions of our past, both good and bad, connect to our present reality. This observation reminds me of a profound teaching from The Afterlife of Billy Fingers by Annie Kagan:

“All roads ultimately lead to the same place….. the present moment.”

Be Gentle With Your Younger Selves

One of the things that we may have a tendency to do during our life review is to talk to our younger selves, express regret and perhaps apologize for not recognizing the short-term and/or long-term impact of our decisions. As long as every decision we made was consistent with our morals, beliefs, and values, there is nothing for which to be sorry. Besides, because of the various life-altering challenges that occur throughout our lives, who we are when we are younger becomes a distant memory. That is how profound our transformation can be after a catastrophic loss. That was the case for me following the death of my eighteen-year-old daughter, Jeannine. in 2003.

If we choose to talk to our younger selves, the message we should communicate is one of unconditional love and gratitude for the teachings that facilitated wisdom in our older years.

Nurturing My Younger Self in The Sweat Lodge

According to Jamie Sams, the purpose of the sweat lodge is:

“To purify the body, mind and spirit so that a new sense of Self may be present on the path. Sweating is one of the things that you do in the lodge but is not the reason that you enter the ceremony of the lodge.”

In the summer of 2015, I participated in a sweat lodge. It was hosted by two Americans, who were taught how to conduct this ceremony by a Lakota elder. I was invited by a friend of mine who was part Native American herself. She suggested that I wear light clothing, bring a towel, and food to share for the meal that followed.

There were about twelve of us crammed into a small dome constructed of small trees meticulously placed in a circle and covered so that no light could penetrate. The sweat lodge consisted of four rounds, with a break in between each round. As I can recall, we recited a variety of different prayers and intentions. The stones that were placed in the pit located in the center of the sweat lodge became progressively hotter. I perspired so much that my left leg fell asleep and became numb. My physical pain was not a product of how the ceremony was conducted, but because my body couldn’t adapt to navigating such a small space.

However, my physical pain was a conduit for other teachings that gave me a different perspective on some early childhood memories.

During the break between the third and fourth rounds, I remember voicing my physical discomfort to other participants. My voice seemed to be coming from outside of myself and had a child-like quality to it. I remember being reminded that I did not have to complete all four rounds of the sweat lodge. After some deliberation, I withdrew following the third round.

Barefoot, with my feet firmly planted in the muddy ground, I began to reflect on my experience.

I first gave thanks to my body for being in service to me. Honoring the pain in my leg allowed me to nurture the little boy who manifested in between rounds. I determined that the little boy at the age of 5 was me, the age when my father left me and my mother, never to be heard from again. When my father left, I felt abandoned and unloved. The sweat lodge also gave me the opportunity to nurture the 5-year old that was abandoned by my father, express my love to him and laud his courage during challenging times. Being connected to my 5-year-old self was empowering, and taught me that at age 60, it is important to be as much in service to ourselves as it is to others.

During one of the rounds of the sweat lodge, I clearly saw the face of a cougar. After I returned home, I pulled out my copy of Animal Speak by Ted Andrews:

“Cougar can teach you to bring out your power and fill your heart with it in a way to take charge of your life.”

There is no coincidence, only synchronicity. 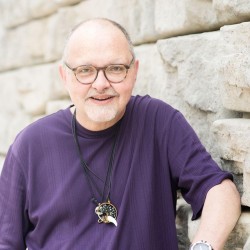 David J. Roberts, LMSW, became a parent who experienced the death of a child when his daughter Jeannine died of cancer on 3/1/03 at the age of 18. He is a retired addiction professional and an adjunct professor in the psychology department at Utica College. Dave is a featured speaker, workshop presenter and coach for Aspire Place, LLC (www.aspireplace.com). He is the chapter leader for The Compassionate Friends of the Mohawk Valley.

Mr. Roberts has been a past HuffPost contributor and has contributed other articles to Medium, Open to Hope Foundation, The Grief Toolbox, and the Recovering the Self Journal.

He has also appeared on numerous radio and internet broadcasts including the BBC podcast World Have Your Say, as well as Open to Hope Television.For further information about Dave and his work, please go to www.bootsyandangel.com